The People Behind Our Success

At HHB Law, our people are at the heart of everything we are and everything we do. Our ability to excel on behalf of our clients, the quality of the work that we attract and our innovative mindset, are all driven by our people. 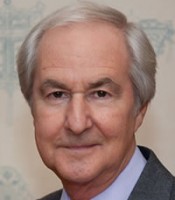 Bob deals with a range of non-contentious private client and business issues, having extensive experience of general commercial law and acquisitions.

Recently Bob has concentrated on the management and development of the company and his specialist interest in inheritance tax planning in which he is regarded as an expert.

Bob qualified as a solicitor in 1968 with his family firm, Haworth Holt & Co, which was run by his grandfather and then father, both successful solicitors. The firm merged with Hall Brydon in 1979 creating, for a while, one of the largest firms of solicitors in Manchester. In 1985 Bob and Richard Bell established Haworth Holt Bell in Hale.

Bob lives in Bowdon with his wife and enjoys walking in the hills near his cottage in North Wales.